by wipeout
Can we please fix the Pokemon database so it matches the Official Pokemon website for ordering and seasons. The current TVDB is version is confusion and has some seasons with a overly large amount of episodes making it a daunting task for anyone trying to find episodes within it.

The official website clearly shows all seasons in their order with correct episode names and numbers. Please reference this page.

by wipeout
So I have been going through my files and applying my own metadata and discovered that the convention used is from the Japanese site. The English episodes are different and are even numbered different as there are un-aired episodes outside of Asia. In circumstances such as this does TVDB have separate lists depending on language/region?

by Mistywing
No. We use the original country's aired order by convention.

and based in this next references* it does not seem we are looking for the same convention as japanese. (joining some seasons)
*-
https://vi.wikipedia.org/wiki/Danh_s%C3 ... k%C3%A9mon
https://ko.wikipedia.org/wiki/%ED%8F%AC ... 9%EB%A1%9D

by fedejofa
I add this. (Trying to add "more valid" sources)
Is a post from other thread:


halfe wrote:I don't know how you guys work but majorety of the sites say that it is 20 seasons

the only page that i find that doesnt add up is Animenewsnetwork.

Even "Themoviedb" says that it is 20 Seasons.
So WHY is it 18 Seasons here and nowhere else

by Mistywing
None of these are acceptable sources in Pokemon's specific case as Pokemon essentially airs/aired without season designations/delimitation in the Japanese broadcast.

It is automatically redundant, pointless and problematic work to cause massive reordering shifts when the resulting order would also be incorrect.

I have personally found a Japanese official website source that I can mostly trace back to 1997, but reordering according to that is also off the table as the series is currently airing and just as in any other reordering case it would cause MASSIVE issues and headaches for anyone using the already entered data.
By my estimates it doesn't result in 20 seasons either, so no one asking for that number would be happy anyways.

As for the latest seasons, they should be following that Japanese source: Archive, Current

by rootbeer
Pokemon in Japan is aired weekly without season numbers. So, the current episodes would be correctly numbered E1057, E1058, E1059, E1060, etc. (without seasons) -or- by putting them all in one season s01e1057, s01e1058, s01e1059, etc. (season 01). Creating seasons out of the Japanese web page, including what is currently listed in theTVDB, is incorrect. So what is most logical is to create seasons which match the aired US seasons and corresponds to EVERY other source that is out there, INCLUDING the official US Pokemon site (https://www.pokemon.com/us/pokemon-episodes/).

If there are still those who disagree with that because the episode numbers are different, then the next most logical thing would be to treat Pokemon as 2 different series, with different episode counts. Make a separate Pokemon (US) series. That way die hards can keep their "original Japanese" numbering system, and everyone else will will be happy to match every other database out there besides theTVDB.

If there is a dispute over whether or not the Japanese series structure should be used here, then the moderators should be obligated to ammend the series title and URL to the show's proper title (Pocket Monsters) for the geographic location they are basing the episode numbering off of. Period.

Nonetheless, I would prefer a separate listing for both Pokémon AND Pocket Monsters. It is one of the few exceptions within anime in which there is a separate title between the dialects. There are also episodes absent from the dubbed series so there are a different number of episodes involved. On top of that, the term Pokémon is used in the Japanese series even though the title has NEVER been updated to reflect this - it is still Pocket Monsters.

I am also on the camp that these two series with the two episode structures and number of episodes should have their own separate listings. There is no rational reason why both should not be available. Especially since if I purchase the episodes in the different countries they will have separate episode numbers.

[Note: The promo material for the Detective Pikachu material in Japan refers to the NON-Japanese produced content as Pokémon instead of Pocket Monsters. Which implies that there is a difference in their mind about the material.)

by Mistywing
Duplicate entries for the purposes of regional rebroadcasts or recuts of the same material are not allowed.
We list series as they air in the country of origin.

Discussions based solely on the title are also completely inane. Most anime actually have different titles in different languages. It is completely pointless to argue for the creation of separate entries based on the titles alone (for any series type.)

Alternate titles are also a feature that will be returning soon with a site update. 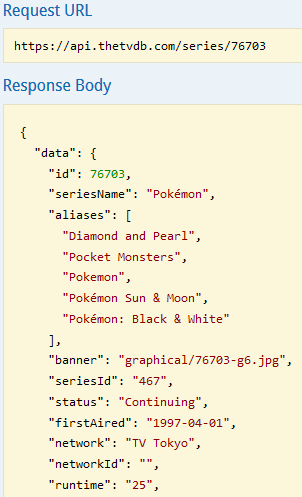