They're related, but different shows, separated by two decades and an entirely different channel.

I second that motion. 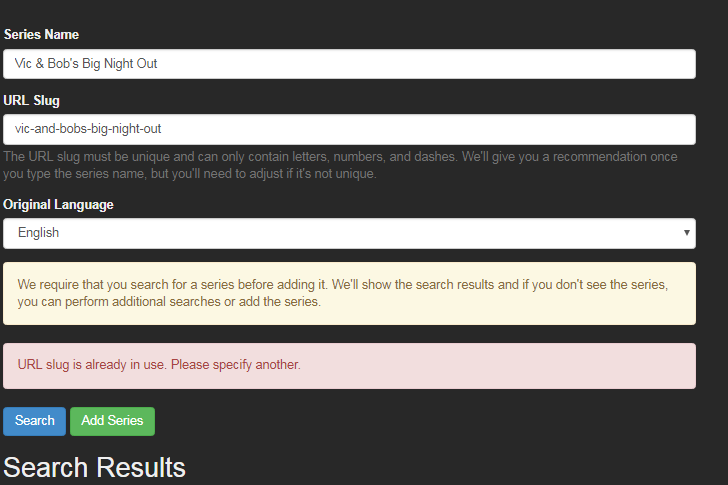 I did find that entry with the slug (Vic & Bob's Big Night Out), but the non efficient search is troubling.^^
Top

There are now triplicates of the "new" show:

The last two pages should definitely be removed, and I also think the "new" show should be treated as a new season of the old show, due to:

1) Channel changes should however not make a difference, several shows change channels without us making duplicate pages for them (just look at Big Brother for example).

3) The format of the show is exactly the same, and stars the same two people as before (Vic and Bob). There is a slight change of the name of the show, but is negligible as it refers to the same person (Vic Reeves) and just adds in Bob's name this time around.

Mods should have the final say I guess, but since it's the same show (same format, same people), my vote is to remove all three of the new pages above, and instead add "Vic & Bob's Big Night Out" as an alias to the old one.

Just to add my comments on this:
Not saying this system is perfect, but the Conan example is flawed since the main part about these shows are the "The Tonight Show" and "Late Night" distinguishables, which are hallmarks of US TV talkshow history

More seriously, when the title is not the same and when the channel is part of another network, then, officially and legally, it's two different shows, isn't it?
Top

Again, not saying the TVDB system is perfect and that it has been followed 100% in the past (especially with non-US shows), but according to the guidelines set by TVDB, these two entries should (most probably) be the same show.

However, (slight) title and channel/networks changes do not affect the guidelines, and whatever is "official" (or "legal", whatever that means) according to someone else does not affect TVDB. The official ruling for TVDB is determined by the guidelines and enacted by the mods, simple as that

The thing we should do to help their process is add input to the points that do matter for the title in question according to the TVDB guidelines, and I think we've both done that already.
Top

This matter has been resolved in a newest topic : viewtopic.php?f=18&t=53064
Thanks for that

The present topic can be be moved to "Resolved" as well.
Top

I could be wrong with this decision but I went with the following reasoning:

I'm not from the UK so I obviously can't watch the public TV there, but that seems to indicate that both networks still retain the airing rights of the different series.
If that is the case this probably isn't a series changing networks like mentioned before as a reason to support the older entry S3.

It seemed more like a reboot to me, and we certainly list a few of those separately.
Top
Locked
10 posts • Page 1 of 1